Evergreen, Louisiana is a small town located in Avoyelles Parish. Chartered in 1869 and incorporated in 1871, the town is home to a little over 300 people, each having very close ties with each other. Evergreen is particularly known for its historical school, Evergreen Home Institute (1856), one of the first schools in Avoyelles Parish. The town bore such celebrities as football player Lionel Aldridge of the Green Bay Packers and San Diego Chargers. Evergreen was also home to E. B. “Ted” Robert, long-time dean of the LSU College of Human Sciences & Education, and grandfather of Dr. Nathan Roberts, the dean of the College of Education at UL Lafayette.

The following exhibit contains archived pages of the entire Evergreen website: www.evergreenla.org. The website, developed by UL Lafayette professor emeritus and Evergreen native Dr. Edmond Dugas, contains photographs, audiovisual items, and written histories and memories provided by the town's citizens. The aim of the website, as posted on the home page, is to "document the past, celebrate the present, and plan for the future while reliving memories and creating new ones." 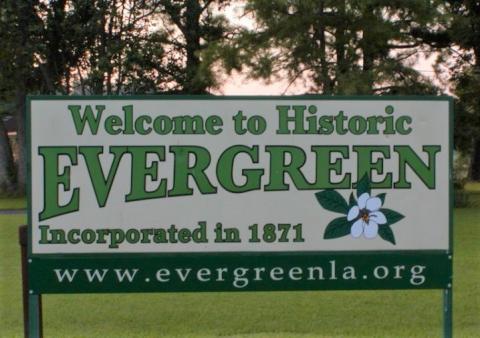 Welcome by Ed Dugas; grace for meal and prayer for ill by Brother David Trimbur.

Bert St. Romain – Mr. A. J. Smith and his profound effect on my life.

Transcript of Video - Clip A (PDF). Captions available under the video menu.

Transcript of Video - Clip B (PDF). Captions available under the video menu.

Where Are They Now?

This site was developed by Dr. Edmond A. Dugas and a team of Evergreen Pelicans. Below are some acknowledgements he would like to make:

"As a member of the last Evergreen High School (EHS) graduation class of 1958, teamwork was ingrained in all students at an early age. The main school building burned on Valentine's Day of 1958, but the senior class was allowed to finish their school year at Evergreen and graduate from EHS the following May. Underclass high school students at EHS were sent to either Bunkie or Cottonport the following school year. The elementary grades remained at the site of the former EHS while the new Evergreen Elementary School was under construction.

Before the website became an idea, there were Evergreen Reunions: 1972, 1976, 1983, and 1990. Additionally, reunions were held in 2008, 2009, 2010 and 2015. Photographs for some of these reunions were placed in the photo galleries of the new website and information for some was placed in the reunion link, showing date, guests, location, and programs.

Committee chairs, members, and participants are to be acknowledged for their loyalty and Pelican spirit, especially Georgie and John Gremillion, Mike and Kay Tanner, and Larry “Pete” and Denise Riche. They received awesome support from all involved, whether coordinating banners, refreshments, parades, style shows, athletic games, program ads, historical information, photographs, and memorabilia. Ruth Dugas Albritton was involved behind the scenes in many aspects of several reunions and provided me with timely updates.

Ruth and Jeanette Armand Barron organized and performed with the “Granny Bells”, whose basketball team marched for the parade and participated in the athletic games which followed. Class members decorated vehicles for the parades, along with faculty, staff, former students, and area people who returned in large numbers for each reunion. Former Band members played at the reunions and for the parades. Those who could not march in the parades played as a group on a trailer.

Although the design and coordination of the website during the early years was done by me and the Pelican website team, consideration of such an undertaking without Dale Descant, first cousin and webmaster of www.bunkie.com would not have occurred. As the www.evergreenla.org webmaster, Dale was highly thorough and professional. It was a joy to work with him on building and coordinating the site. Nothing to him was impossible. His positive attitude helped us build the site in many areas not originally planned. Years later, Mike Tanner, accepted the responsibilities of coordinator and webmaster, with a working format and photographs and information posted.

The Pelicans did not discriminate when it came to accepting photographs to be posted on the website. We encouraged new images, as well as those from the past. Ryan Rabalais and Mike Tanner, were excellent at providing new photographs, with Patrick Descant doing some editing. We accepted photographs from everyone.

Mike and Kay Tanner did an awesome job with all aspects of the 2010 Reunion at the Church of Little Flower Church Hall, including banners, memorabilia, registration, meals and refreshments, photograph area, computer area to view the website, program, and more. The Pelicans who submitted postings for the website are to be acknowledged for their information, including News, Military, Memories, Memorials, and Photographs. Each posting helped made the site successful.

John Smith, son of principal Anthony Smith, sent me a CD entitled “Evergreen School” which includes 10 chapters about various aspects of school life in Evergreen, spanning almost a century. John designed the CD from papers and photographs which his father had preserved. One chapter includes the Evergreen College with announcements from the principal W. J. Dunn, 1899-1900. Other chapters include Band, Floats, Temporary School (1958), a copy of the first edition of the Magnolia Leaf in 1946, and more.

Videographers: Dub Dugas made VHS videos of the 1983 Reunion and the 1983 Male Beauty Contest at Church of the Little Flower. These were followed by extensive filming, CD design and duplication by Ryan Rabalais. Ryan used his dedication and talents to film and produce a DVD of the 1990 Reunion containing almost 2 hours of video. Mike Tanner filmed some of the reunions after 2009.

The Civic League played a large support role in the reunions and website, as did Anna Belle Jeansonne Blanchard with her care of the Evergreen Museum.

Georgie Galland Gremilion, Mike Tanner, and former faculty and staff helped with the lists of former students, faculty, and staff, along with other educational information.

The Evergreen Town Council placed two large signs entering town, and businesses such as Irvin Gauthier placed a similar sign for www.evergreenla.org in front of his auto repair shop.

The financial support of early reunions came primarily from donations and program ads led by Bobbie Robert Flake and her committee. However, the website existed financially solely on memorials and donations. There was no advertising on the website.

It became necessary to periodically send email newsletters to the Evergreen Email Address Book and that was coordinated by Joyce Bordelon Nelson. She and her sister, Maurine Bordelon Lacour, teamed up to create the Evergreen High School Legacy Cookbook, which had many Pelicans submit their recipes in a variety of food areas.

Everyone involved in both the reunions and website was very appreciative of our Evergreen families, EHS faculty and staff, and church and community leaders who provided settings so our citizens could grow and develop in positive ways. We all remember with fondness, respect, love, and admiration our principal, Mr. Anthony J. Smith, 'Now are you pleased with yourself?'