Leading up to the University's Centennial Celebration, the College of Education was assigned November 1998 as its Academic Showcase month. In August 1998 the College of Education Academic Showcase Committee held a Showcase Kickoff to help organize current and former students, faculty, and staff for the events being planned for November. During this month, events included three programs on Acadiana Open Channel, Preview Day, and the Recognition Social where 100 graduates were recognized. Additionally, there were organized visits to graduates in each of the Acadiana Parish School Systems and Parochial Schools, exhibits, and displays by elementary students on Preview Day at the Alumni Center, and 147 letters were collected for the Book of Letters. Graduates displayed their USL pride as an educator at home, school, and their workplace to help develop awareness about the COE Academic Showcase and the Centennial Celebration. USL COE students had special dress days and faculty and staff had a door decorating contest during the month to help increase awareness. The various programs were taped and videos of oral histories were collected. Some of these were scheduled with specific graduates, faculty, and administrators, while others were done randomly, like Homecoming 1998.

The Rest of the Story

A CD of these oral histories was published and distributed in 2000. Over the passing years, problems began to develop with the technology used to navigate the programs. When discovered, solutions were sought from technology sources on and off campus, but without success. In 2010 and the years to follow, the CD was sent to various companies throughout the U.S. who thought they could open the CD and reprogram it, but these claims never materialized. After several of these attempts, Dr. Gerald Carlson, Dean of Education, was made aware that Dr. Doug Williams, Professor in the College of Education and Director of CALIT, thought he had a possible solution. Dr. Williams identified the needed software and Dr. Carlson agreed to purchase the software for the College of Education. The new software program was successful and with new life, Dr. Williams was able to capture some of the CD. The videos are available to you at this time because of his dedication and perseverance. He is owed a great debt of gratitude because without his efforts, what was captured in 1998 would probably have been lost forever. In addition, he helped restore some of the sections of the Book of Letters. With that assistance and the original letters, our earlier editors were able to rewrite each of them exactly as they had been produced on the CD.

The digital photos of the College of Education Academic Showcase Recognition Social written program contain the various committee chairs who made outstanding efforts for the showcase. However, there are several special people who made unique contributions above and beyond the call of duty toward the success of the Academic Showcase. These are as follows: Ryan Brooks, designed and narrated scripts, filmed many of the programs, and designed "The Disc"; Ernie Alexander, served as emcee for our events and produced the three AOC television programs; Dr. Ed Goellner, filmed each of the oral histories; Sharon Lantz, provided the professional and technical services of the E. T. R. C. with an open door in a cooperative spirit.

Lastly, special appreciation is extended to all who wrote letters for the Book of Letters, participated in the Academic Showcase Programs and Centennial Celebration, and participated in the videos to help preserve our storied history. November 1998 was a very special month in the history of the University and the College of Education and all committee members are grateful to have played a small role in bringing those activities and opportunities to our former students and the public we serve. 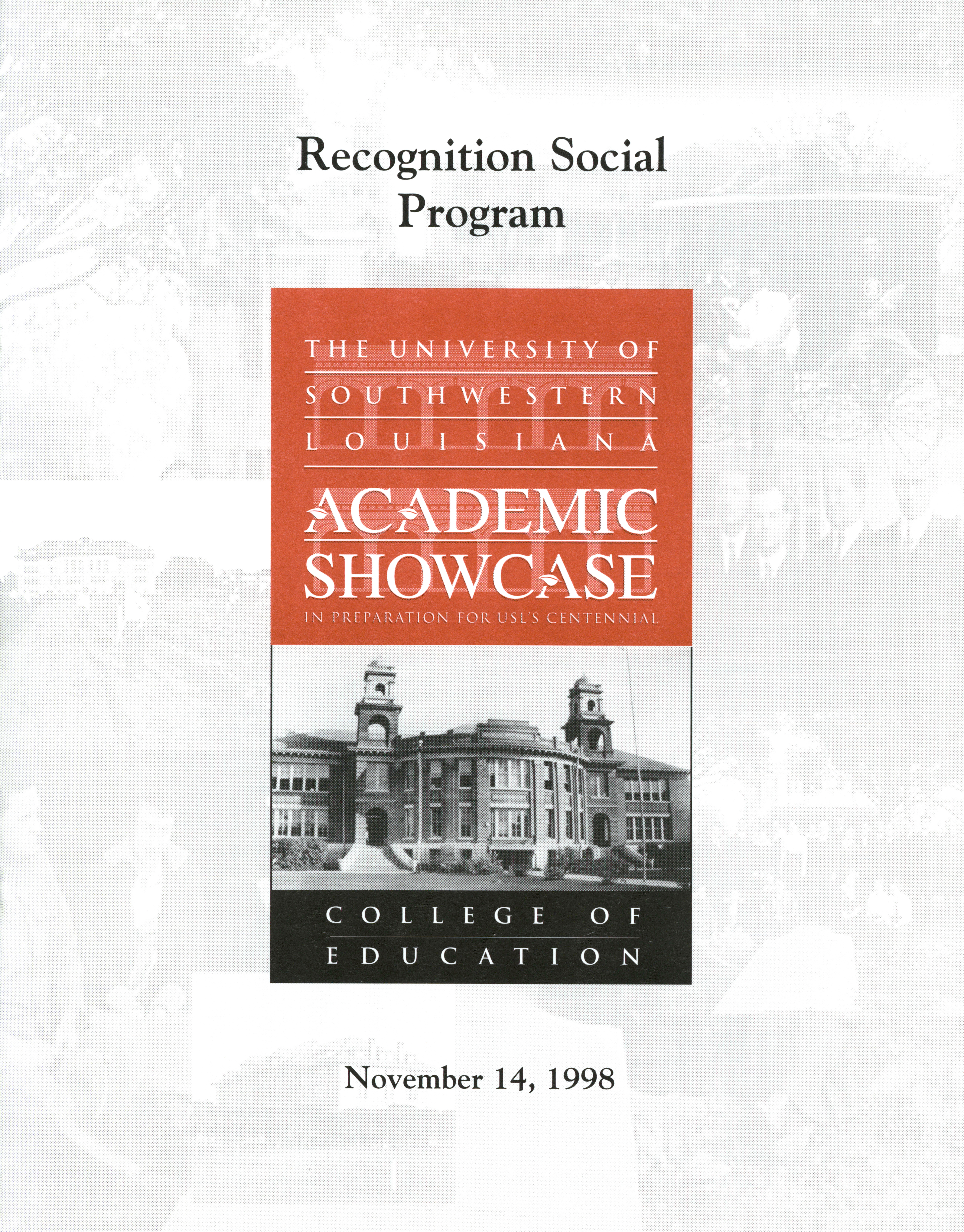 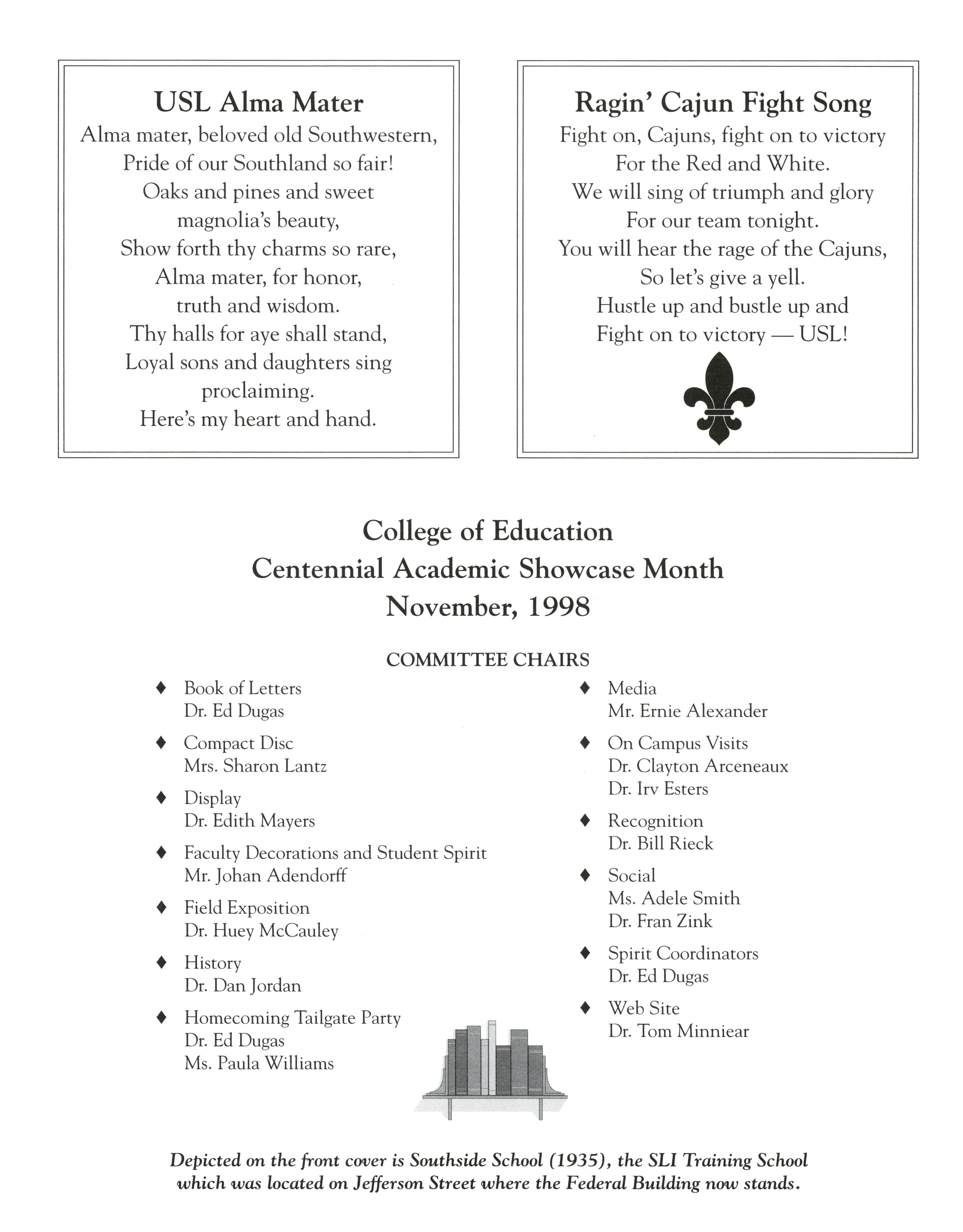 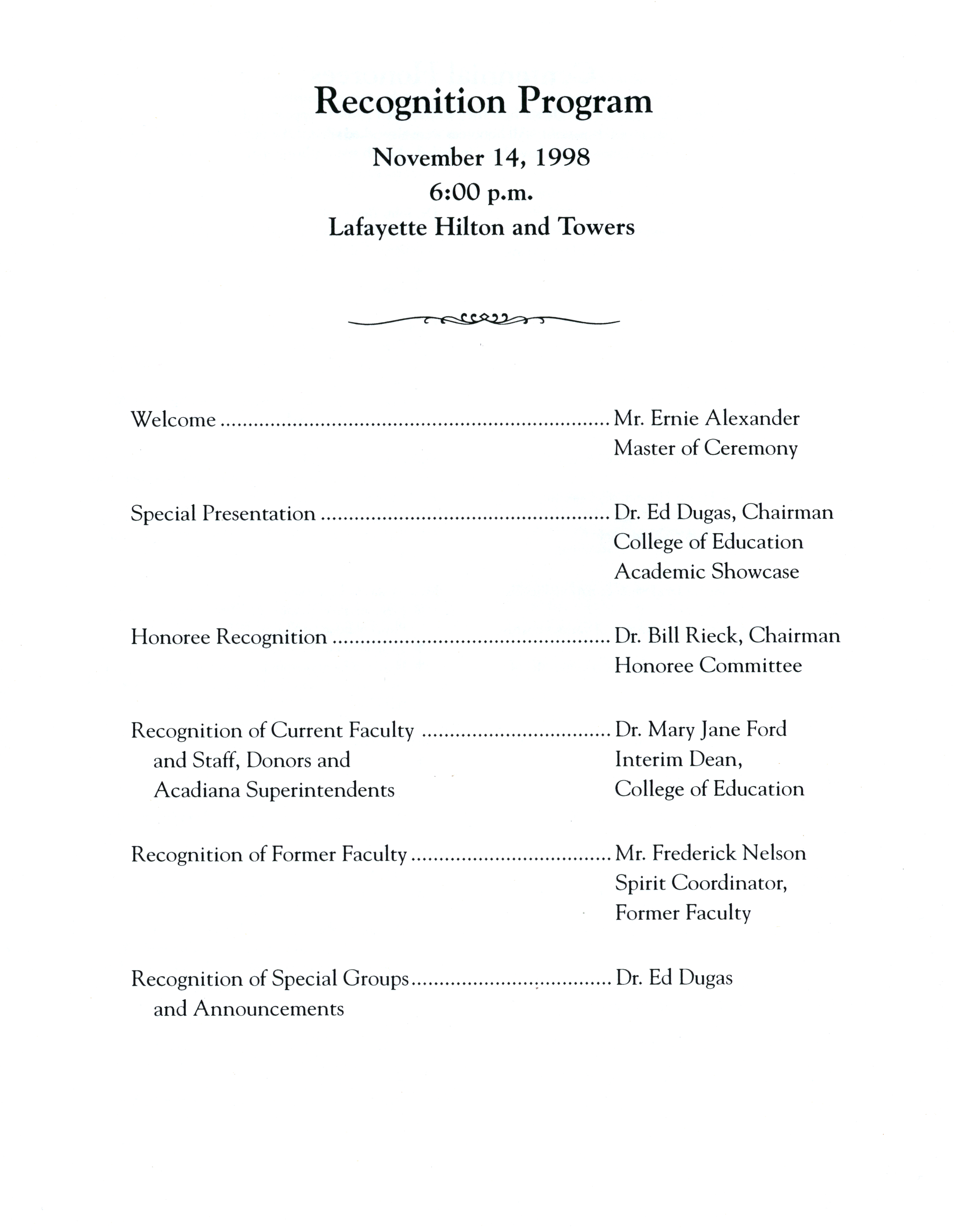 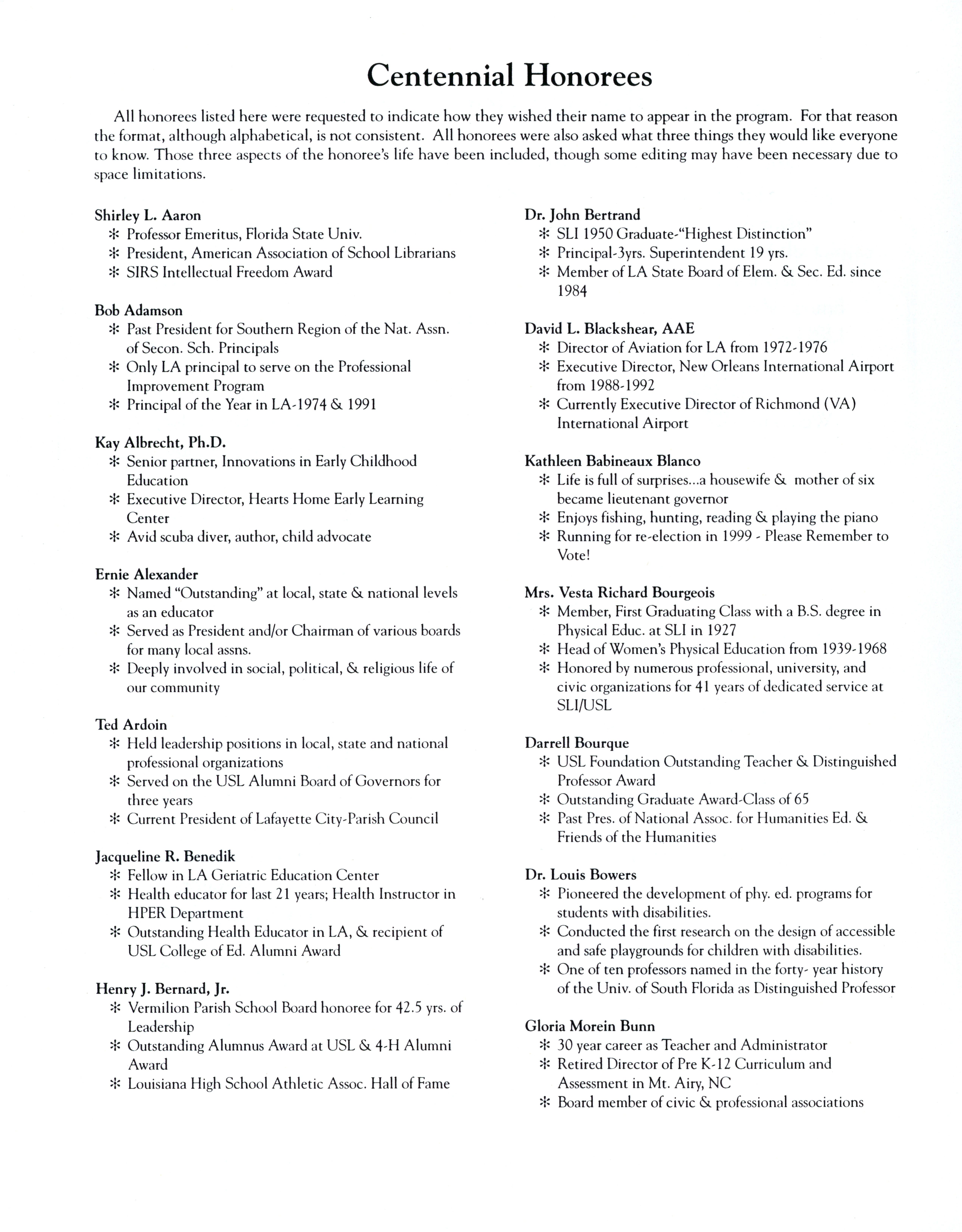 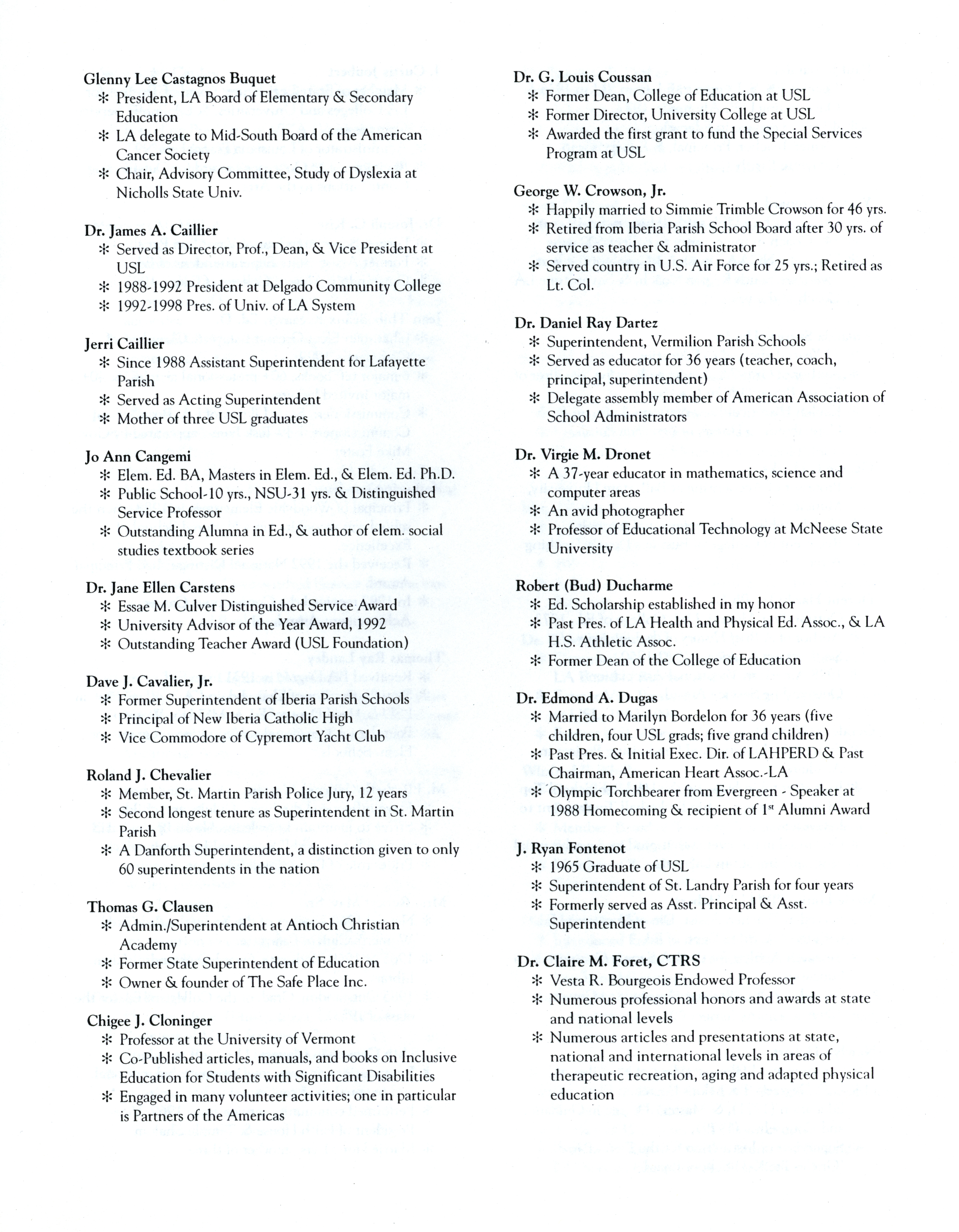 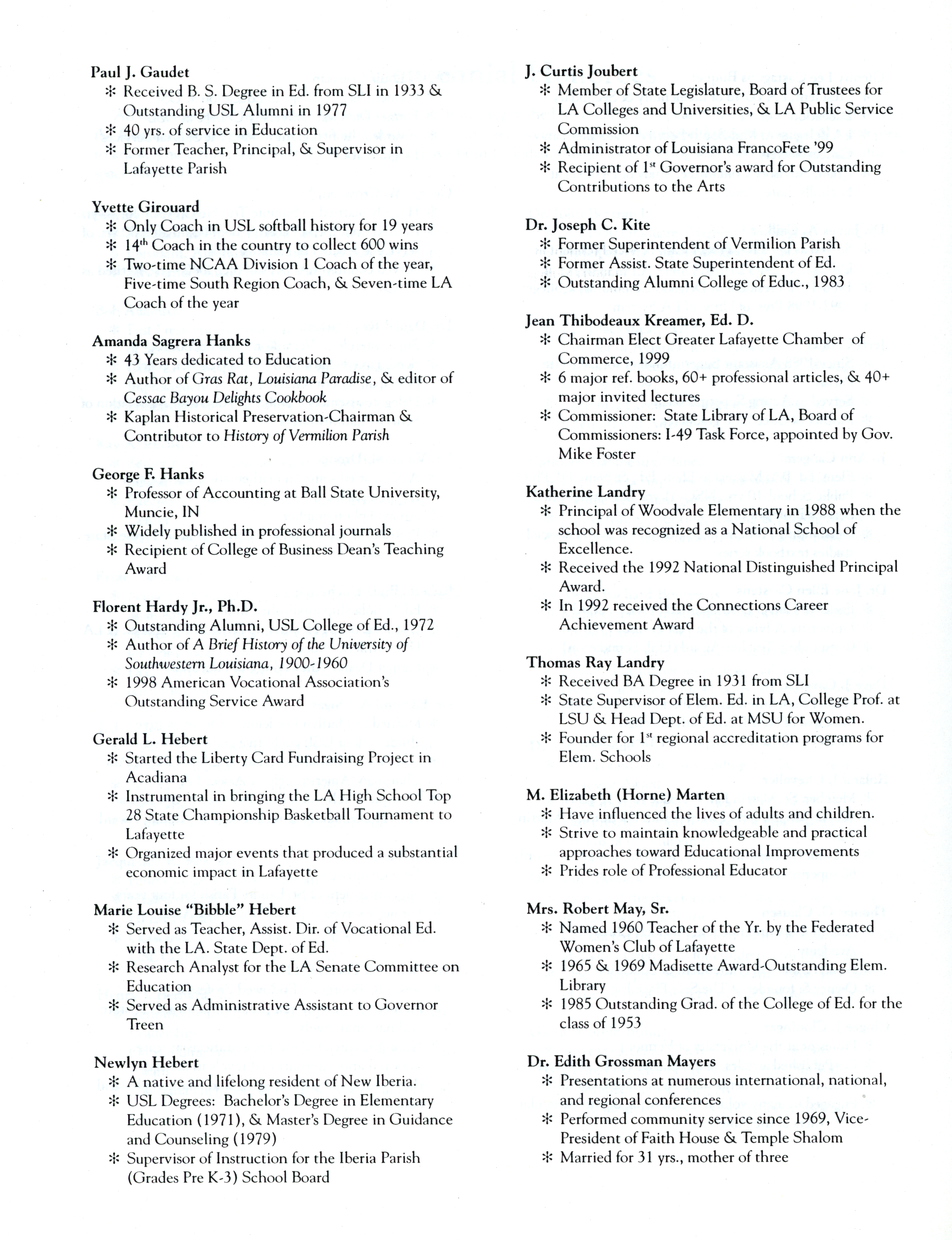 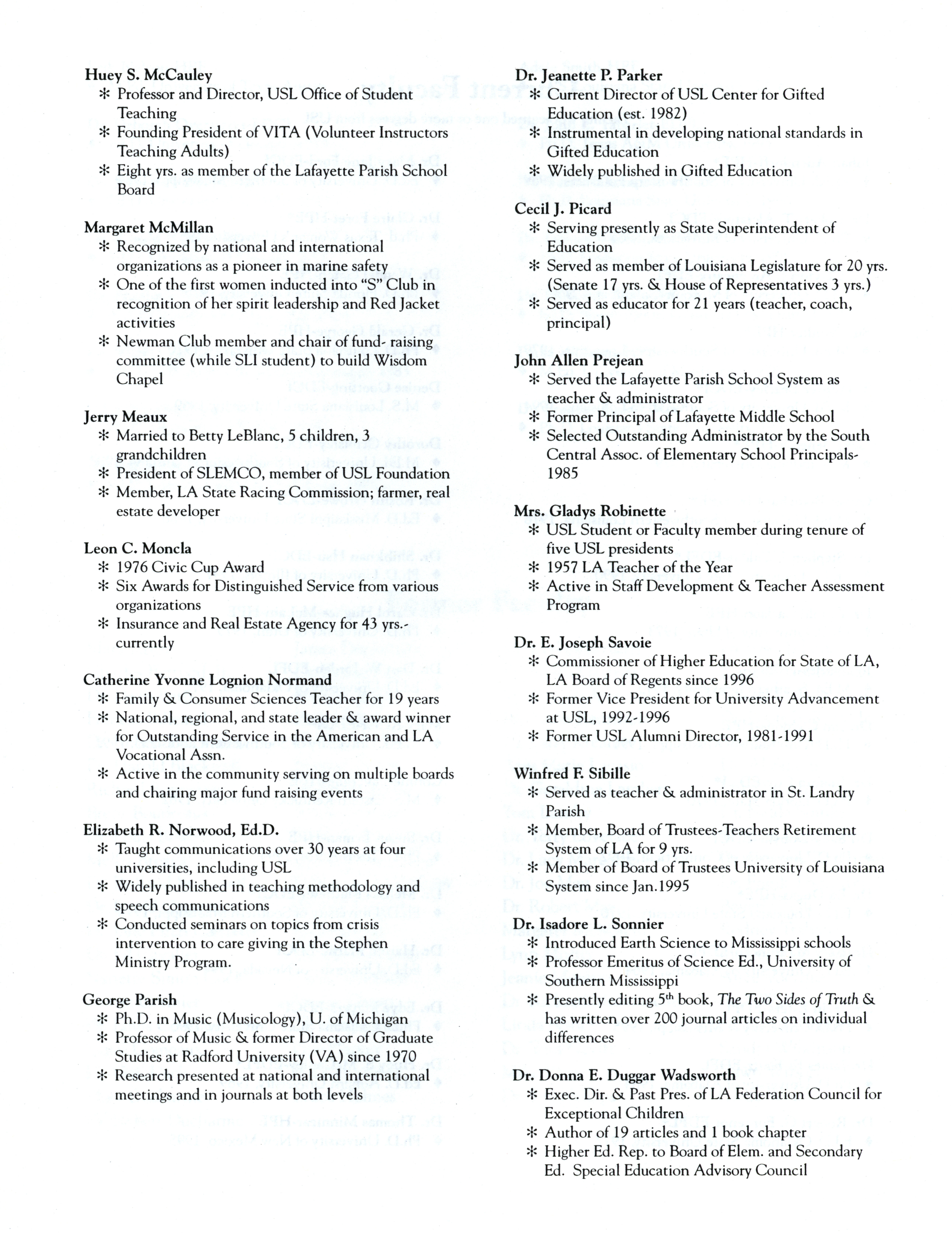 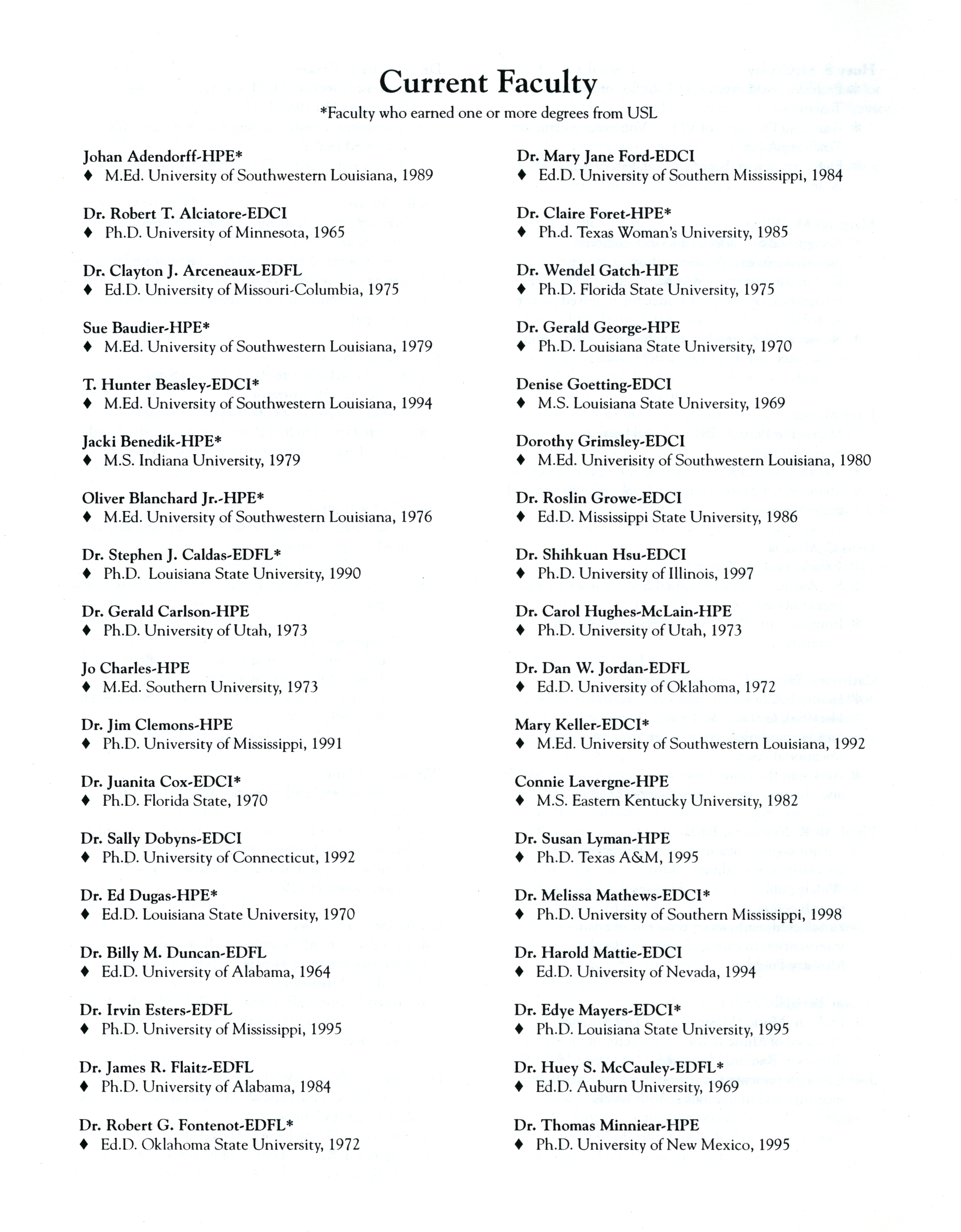 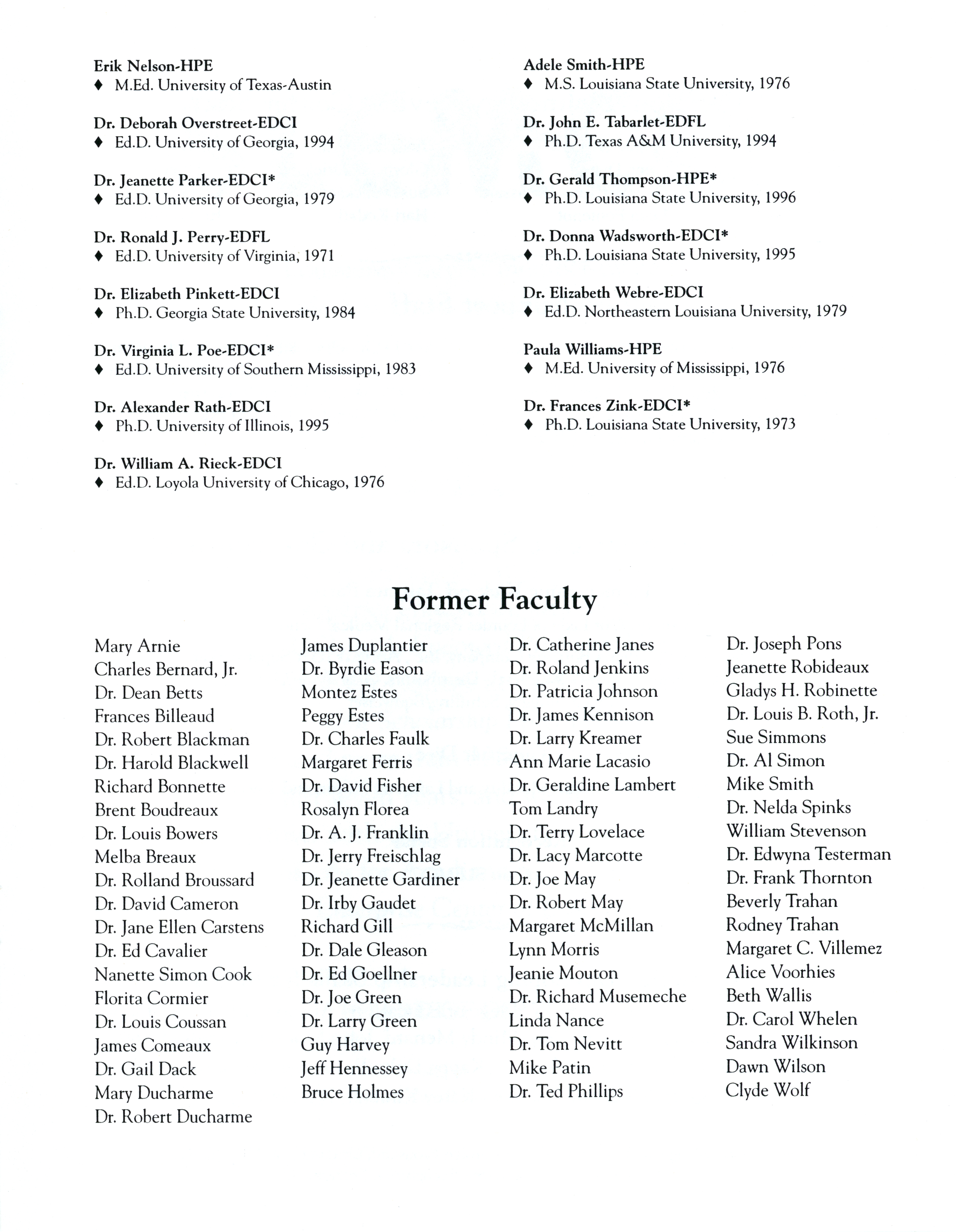 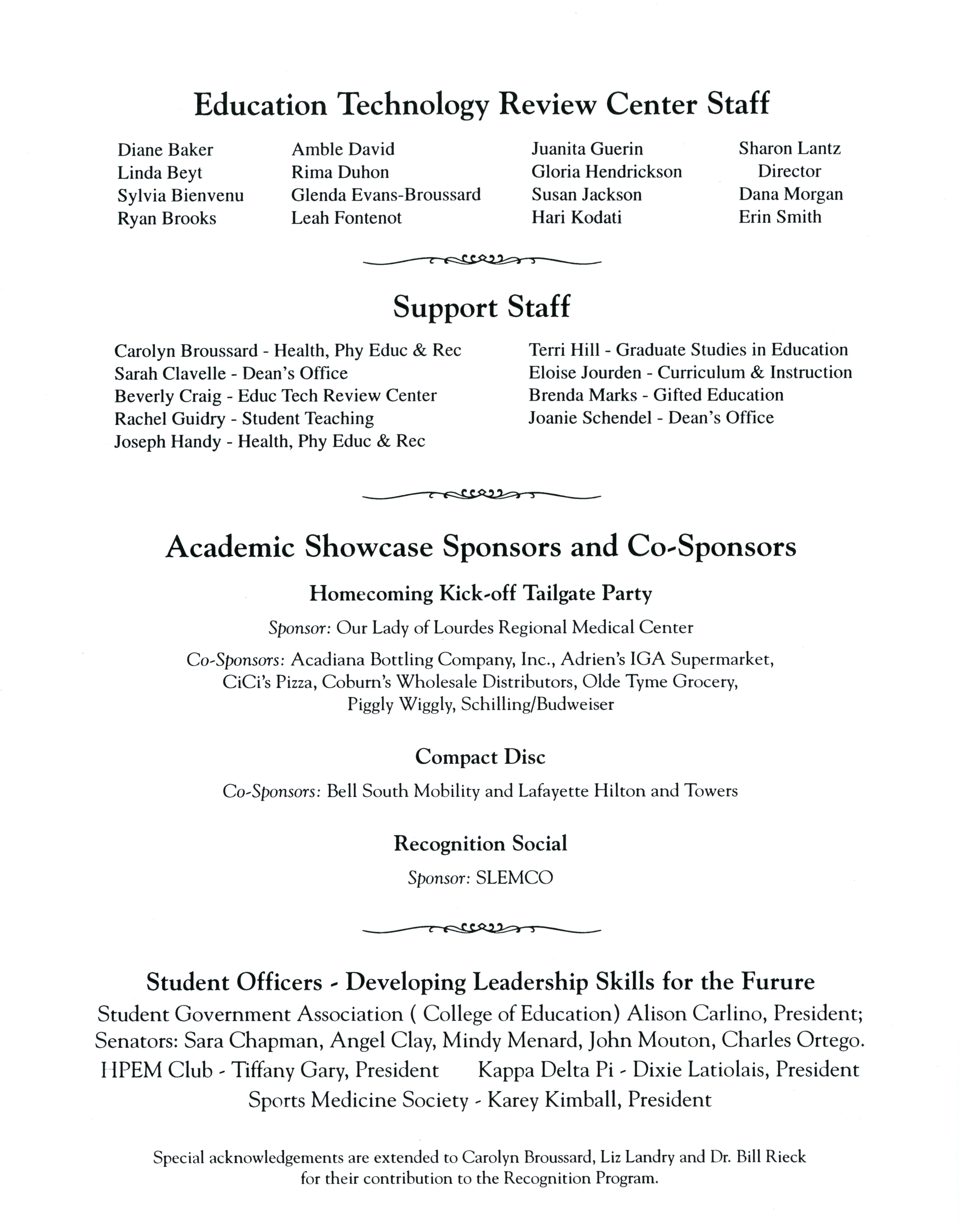 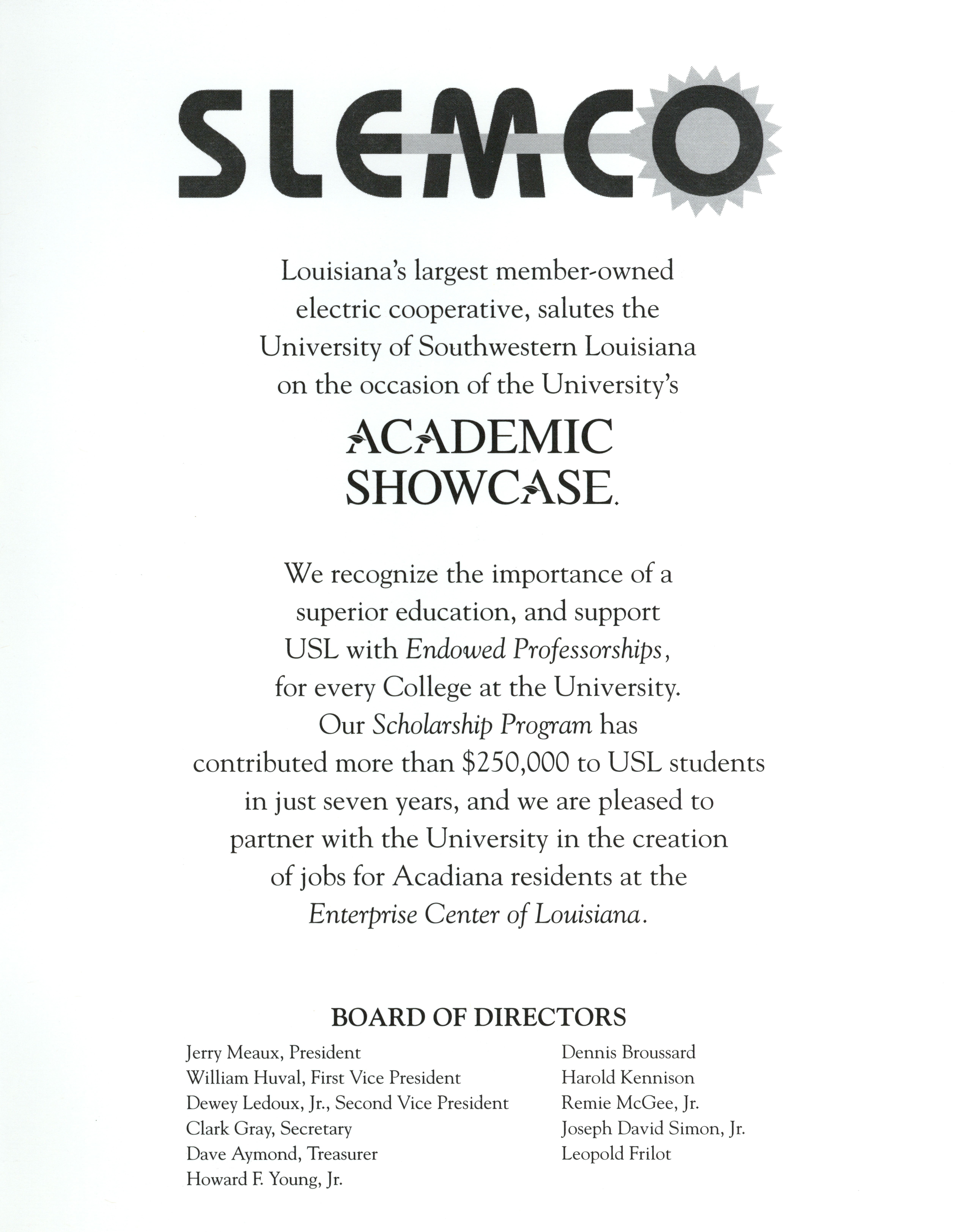 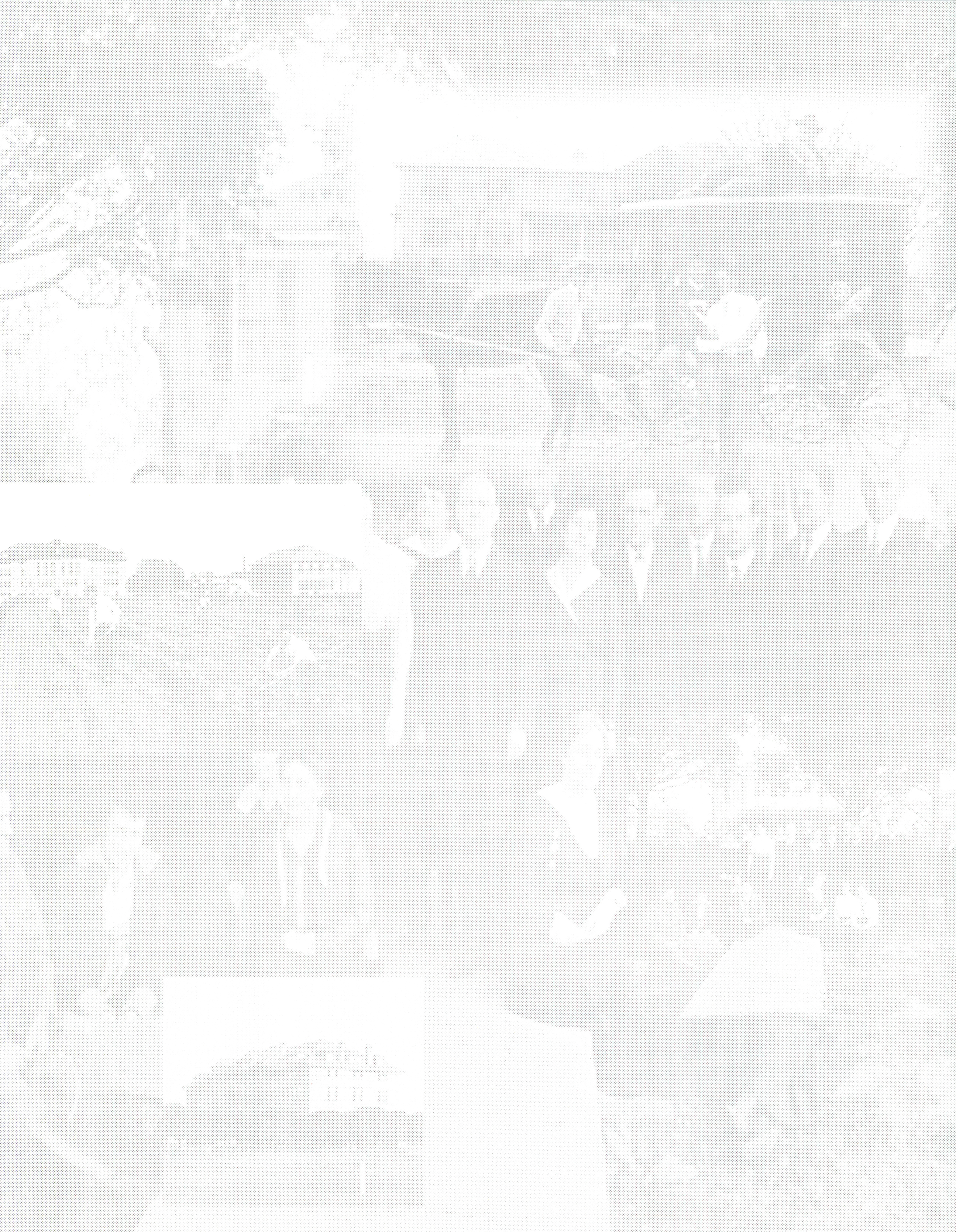