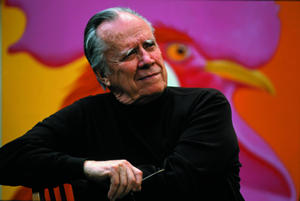 Franklin Boggs’ distinguished career as an artist and a professor spans the major part of the 20th century.

For more information about the artist and the mural restoration, view the Franklin Boggs Collection. 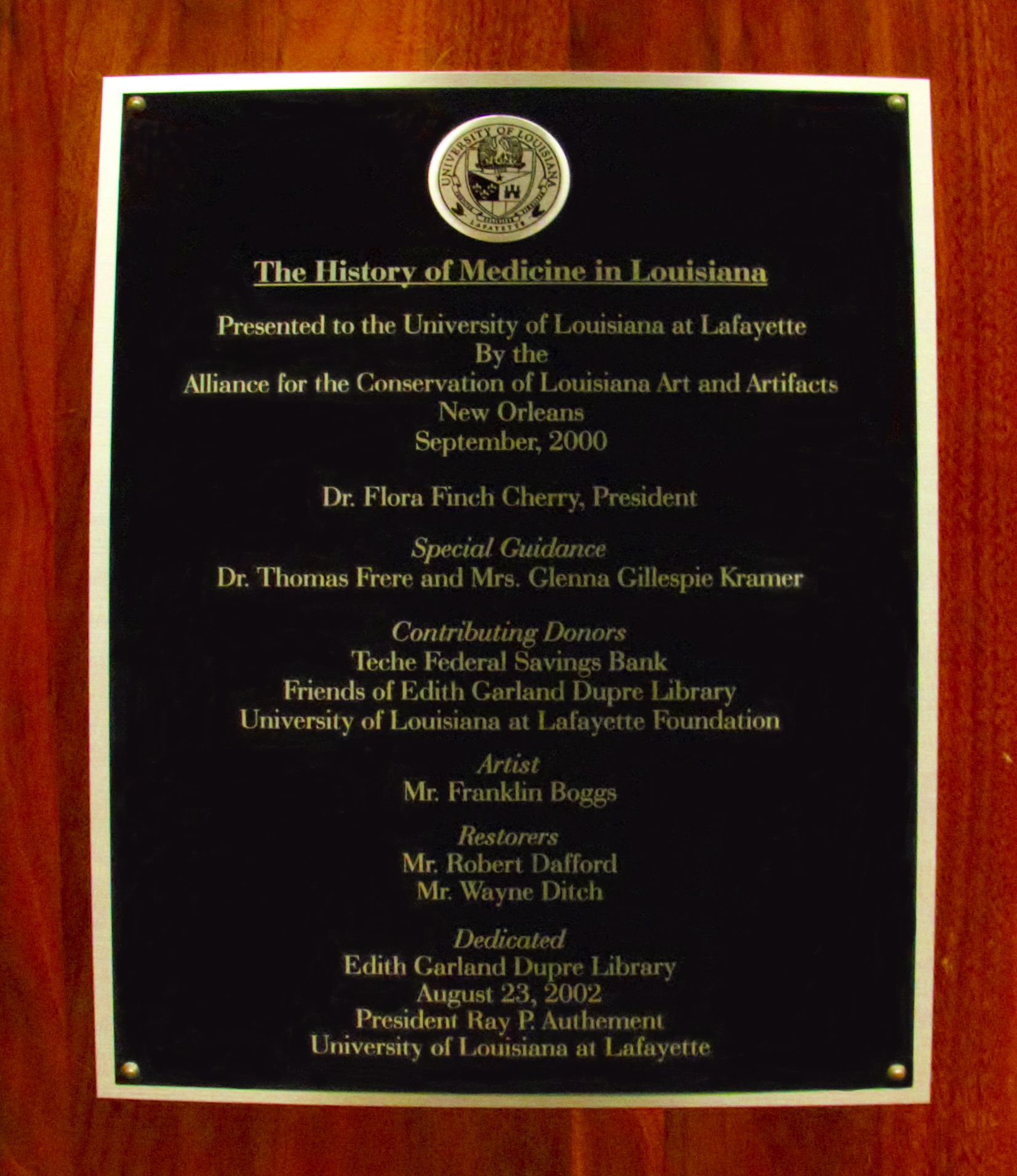 1948 - Installed in the lobby of the Aloe Company Headquarters in New Orleans, LA

Home » About Us » General Information

The 112-foot by 57-inch mural located in Dupré Library's Reference & Research Services area depicts memorable events in Louisiana’s medical history. It represents the great strides in medicine and public health occurring in the state from the early 18th century through the middle of the 20th century. The multi-panel mural begins with the habitation of the state by Native Americans and ends with the introduction of nuclear medicine during the advent of the atomic age. The semi-abstract painting has been described as “probably the most unique piece of artwork in Louisiana.”

The History of the Mural

In the 1940s, the Aloe Company, a medical supply company in New Orleans, LA, commissioned Franklin Boggs to capture the evolution of the state's medical history. Boggs made several trips to New Orleans to gather research for the project. He worked on the mural entirely in Wisconsin on the campus of Beloit College. He completed the mural in 1948 after taking two years to paint it. Boggs personally packaged and shipped the panels and oversaw the installation.

After 25 years on display at the Aloe Company, the mural's new home became the Tulane Medical Center. Boggs again traveled to New Orleans to oversee the removal and reinstallation. Several years later, the panels were taken down and placed into storage. The mural was on the path to obscurity and probably lost when it re-emerged from a Tulane storage area 15 years later. A group familiar with the artwork rescued the panels looking to preserve its history but struggled to find an organization willing to take the massive piece.

When hearing about the mural and its preservation effort, Dr. and Mrs. Thomas F. Kreamer of Franklin, were instrumental in getting the work to the University of Louisiana at Lafayette. At the University, the panels were restored by artists Robert Dafford and Wayne Ditch through the generous support of Teche Federal Savings Bank, the Friends of the Edith Garland Dupré Library, and the University of Louisiana at Lafayette Foundation. In 2002, the mural became part of the landscape of the 1st floor of the library. This time around, Boggs, now in his 80s, was unable to travel to oversee the operation. He did, however, write a letter to the University acknowledging the mural's restoration and preservation and, in a phone interview with library faculty and others, described the mural's new home at an academic library as simply "ideal".

View the mural in its entirety (PNG).

The History in the Scenes 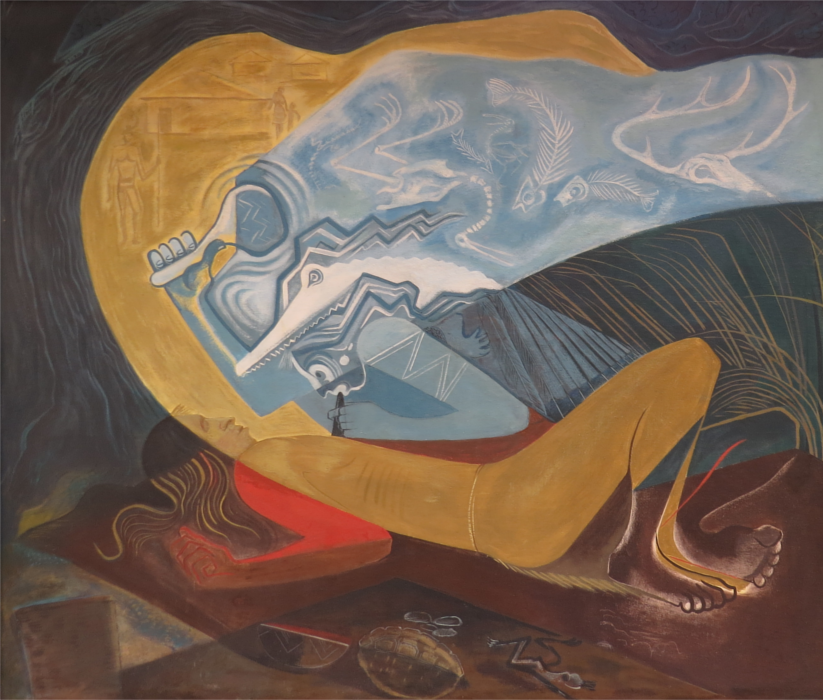 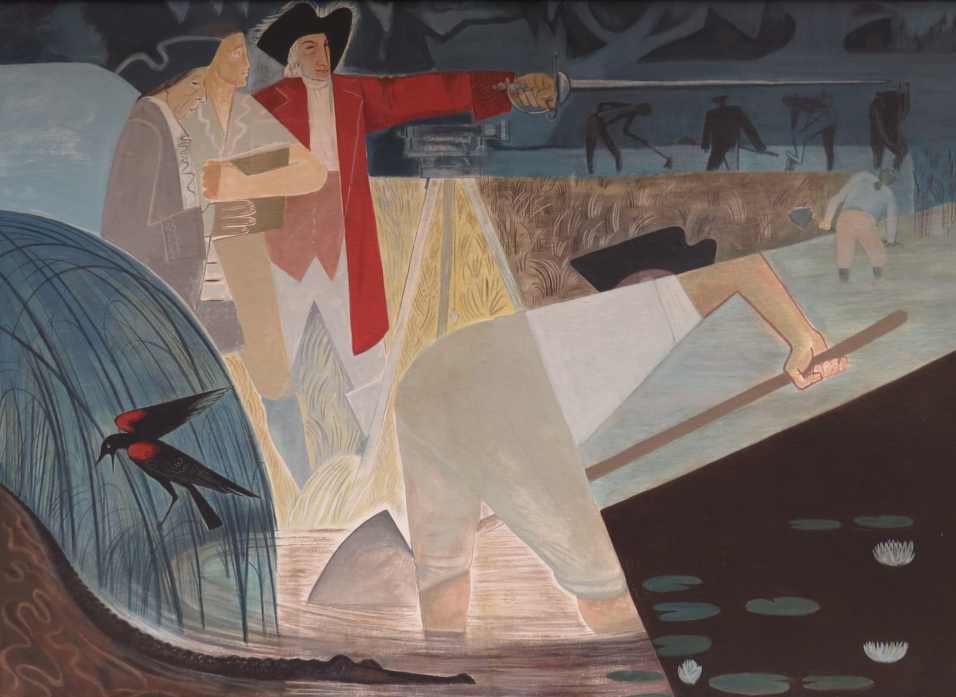 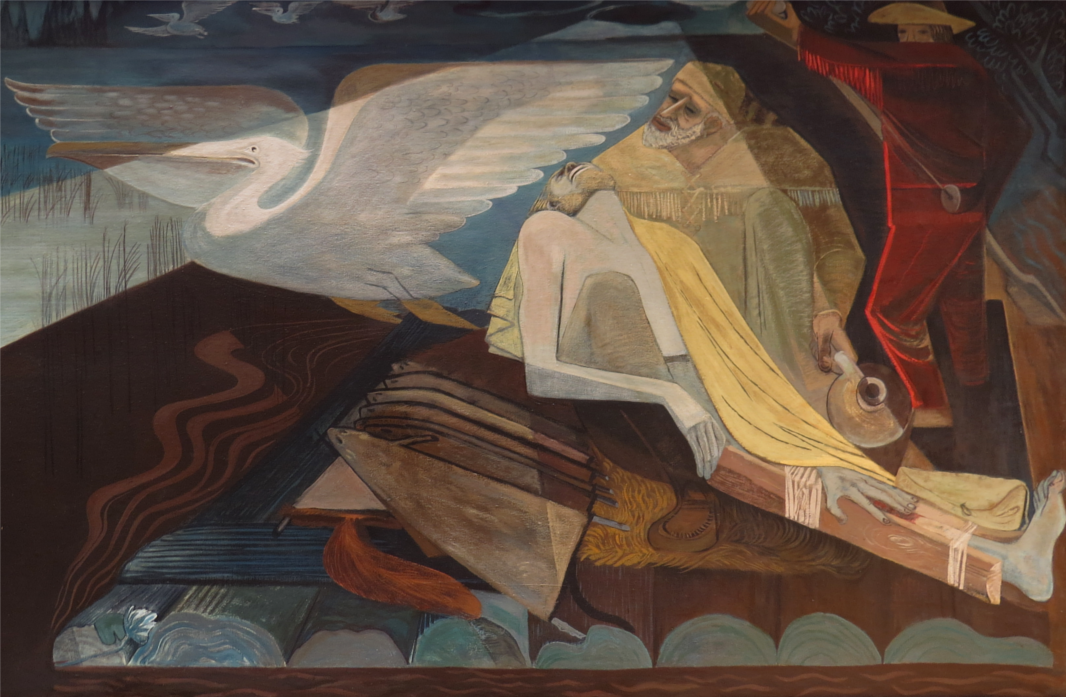 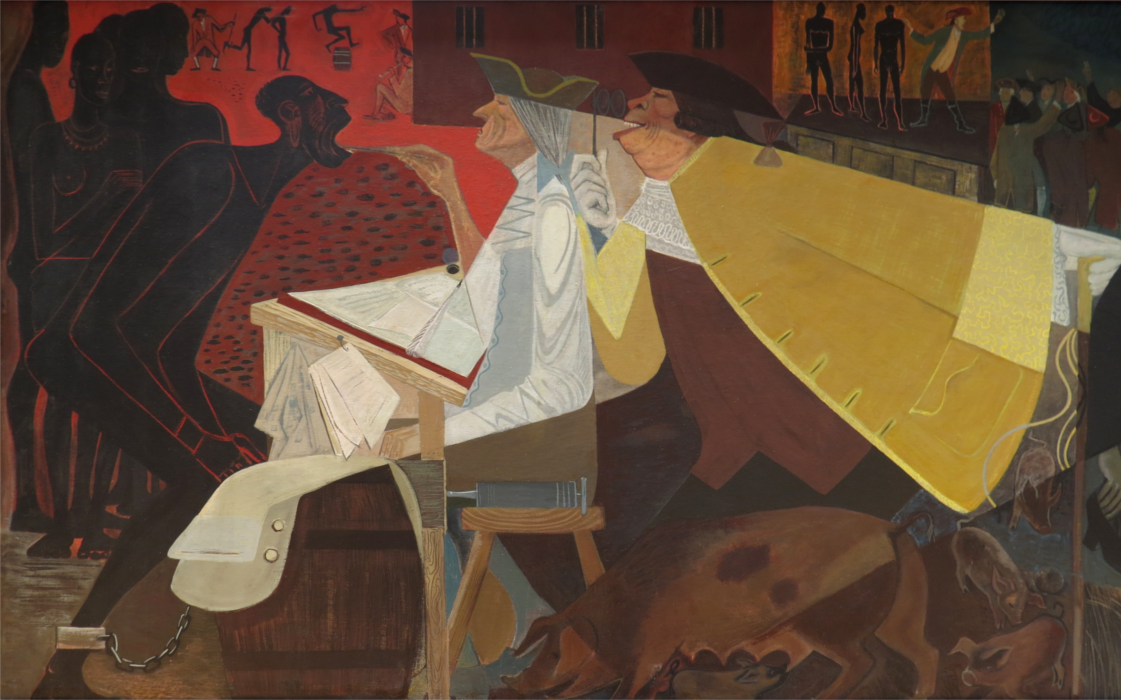 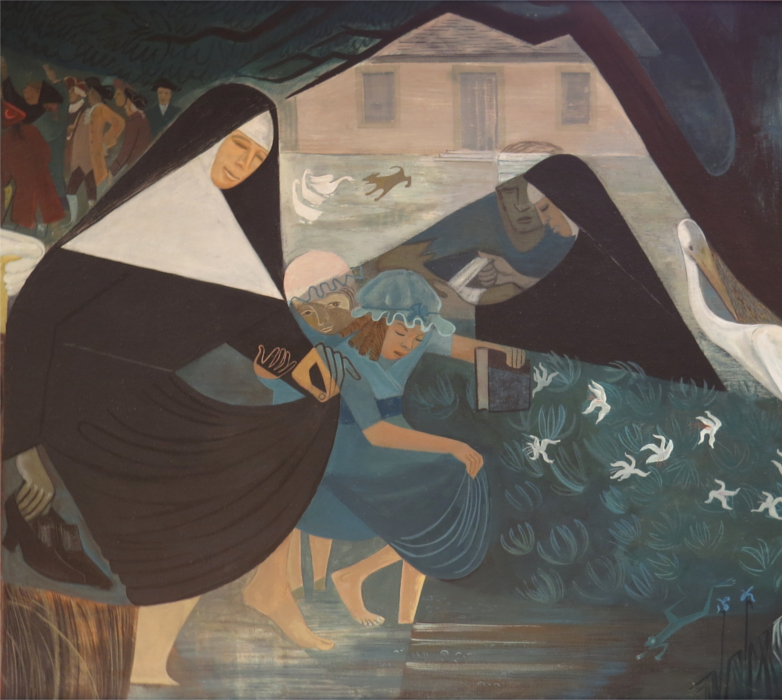 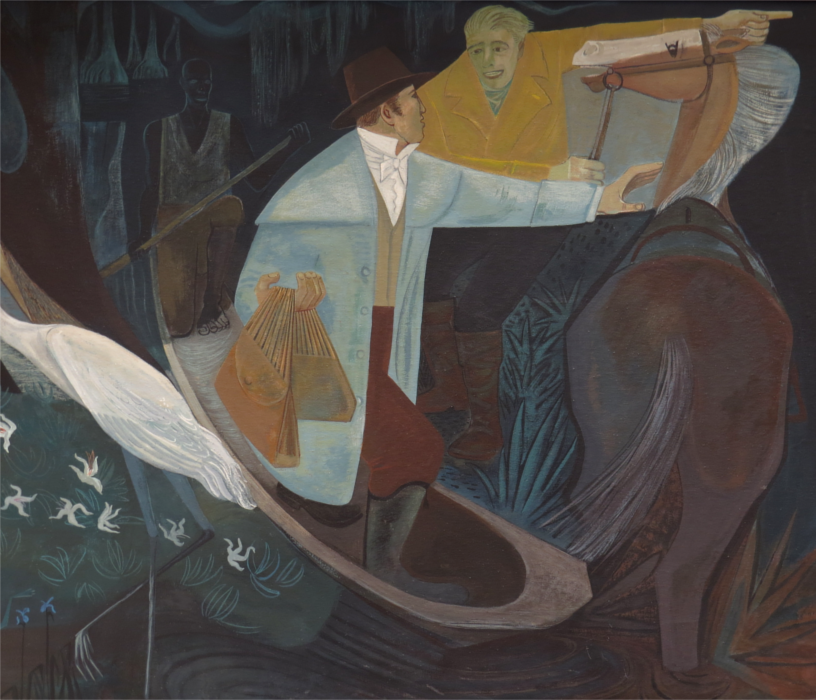 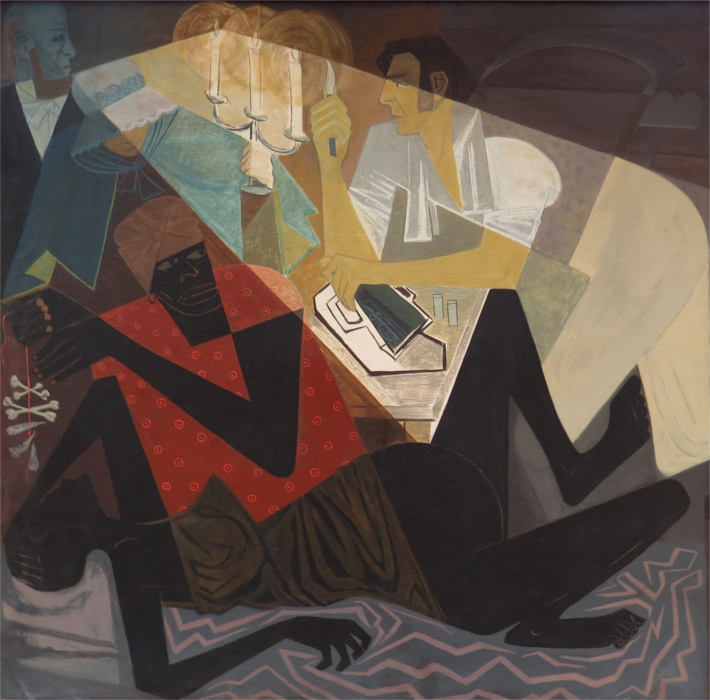 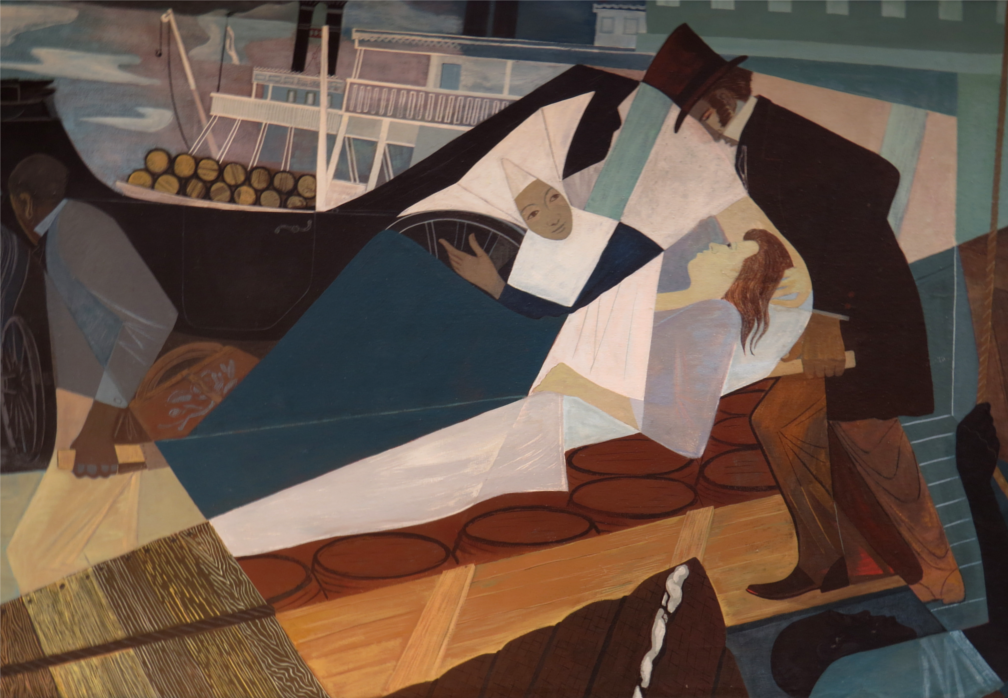 Indian medicine men used sucking tubes, charms and other magical paraphernalia to cure the sick. (Voodoo rites and charms were later brought to Louisiana with the first shipment of slaves from Africa and the West Indies. It was originally a "religion" of ancestor-worship, accompanied by belief in witchcraft, magic, and sorcery. Ceremonial rites and magical charms, amulets and talismans were used to ward off evil spirits, which were believed to be the cause of disease and death.)

Corn whiskey was considered good treatment for all ailments by early trappers and frontiersmen coming down the Mississippi River.

A colonial doctor inspected slaves before they went on the auction block. This was not particularly a health measure, but rather an insurance measure to prevent a slave auctioneer from selling an unhealthy slave for a high price.

Ursuline nuns nursed the sick and taught children during the difficult early days of the struggling colony. The first hospitalization for the colony was provided by that sisterhood not long after their arrival in 1727.

The lack of good roads forced country doctors to make use of the pirogue, or dugout canoe, through the bayous and the horse over land to reach outlying plantations.

Mississippi River steamboats made New Orleans a medical center. Patients, doctors, and medical students were provided with faster transportation than was previously available. By this time, Charity Hospital was the leading medical center in the Deep South.


12,000 people died during the summer of 1853 when New Orleans suffered from its greatest yellow fever epidemic. Doctors and nurses were vulnerable because they did not know that the mosquito was the carrier of the disease.


Many southern doctors followed the Confederate troops. Treatment was crude, inadequate and unsanitary.


The leper colony at Carville, LA was founded in an old plantation home. At this time, the disease was considered as something unclean and brought great grief to the families of afflicted persons.


As a result of The Walter Reed Commission's discovery that yellow fever is carried by mosquitoes, many preventative measures were taken in New Orleans. The fire department sprayed live steam in all outbuildings; laws required sprinkling stagnant pools with kerosene and covering cypress cisterns with gauze in order to destroy breeding grounds for the insects.


Dr. Rudolph Matas became known throughout the world for his vascular surgery in treating aneurysms.


The test of the atomic bomb on Bikini Island in the Pacific focused the attention of the world’s medical men on the effects of radioactivity on plants and animals.


Medicine’s new field of research involved the use of isotope tracers in the bloodstream.