In honor of National Armed Forces Day, we want to take this opportunity to thank all of the people who have served a

As part of the “Who Gets to Vote?” book series, Special Collections created a digital exhibit of materials dedicated to the League of Women Voters (LWM). LWV is a national organization with chapters all over the country, aiming to promote political activism and participation on various civics issues. The exhibit displays items from the Lafayette League, the state League, and the national League. It acts as a supplement to the series, which covers themes such as the expansion of voting rights since the country’s founding, the electoral process, women’s suffrage, and historic and contemporary voter suppression practices.

"Who Gets to Vote?" is part of the “Why It Matters: Civic and Electoral Participation” initiative administered by the Federation of State Humanities Councils and funded by the Andrew W. Mellon Foundation. Edith Garland Dupré Library received a Louisiana Endowment for the Humanities grant to host a community book reading and virtual discussion series on voting rights in the United States. There will be four book discussions throughout the month of March led by Drs. Pearson Cross and Theordore Foster of the University of Louisiana at Lafayette.

For more information, view "Who Gets to Vote?". The digital exhibit can be found on under Digital Exhibits. 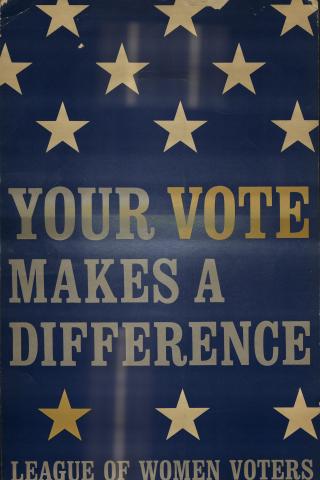