Home » About Us » Publicity “Who Gets to Vote?” is part of the “Why It Matters: Civic and Electoral Participation” initiative administered by the Federation of State Humanities Councils and funded by the Andrew W. Mellon Foundation.

A Louisiana Endowment for the Humanities grant will enable Edith Garland Dupré Library to host a community book reading and virtual discussion series on voting rights in the United States. The University of Louisiana at Lafayette’s library is one of 10 across the state to secure an LEH grant for “Who Gets to Vote? Conversations on Voting Rights in America.”

Beginning Wednesday, March 10, and continuing for the next three weeks, participants will discuss one of four books. The discussions will be held on Zoom from 6:30-8 p.m. UL Lafayette faculty members will act as facilitators.

Dr. Pearson Cross, a professor of political science, will facilitate the discussion on March 10 and 24. Dr. Theodore Foster, an assistant professor of history, will moderate on March 17 and 31.

Themes that will be discussed include the expansion of voting rights since the country’s founding; the electoral process; women’s suffrage; and historic and contemporary voter suppression practices. 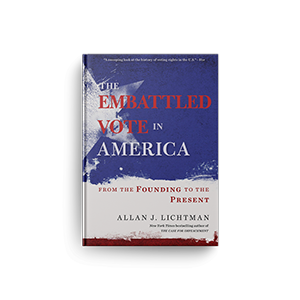 The Embattled Vote in America: From the Founding to the Present by Allan J. Lichtman

Americans have fought and died for the right to vote. Yet the world’s oldest continuously operating democracy guarantees no one, not even its citizens, the right to elect its leaders.

For most of U.S. history, suffrage has been a privilege restricted by wealth, sex, race, residence, literacy, criminal conviction, and citizenship. Economic qualifications were finally eliminated in the nineteenth century, but the ideal of a white man’s republic persisted long after that. Today, voter identification laws, registration requirements, felon disenfranchisement, and voter purges deny many millions of American citizens the opportunity to express their views at the ballot box.

An award-winning historian who has testified in more than ninety voting rights cases, Allan Lichtman gives us the deep history behind today’s headlines and shows that calls of voter fraud, political gerrymandering, and outrageous attempts at voter suppression are nothing new. The players and the tactics have changed ― we don’t outright ban people from voting anymore ― but the battle and the stakes remain just as high.

Download the discussion guide for The Embattled Vote in America (PDF). 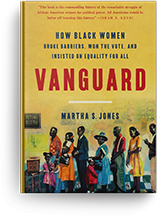 Vanguard by Martha A. Jones

In the standard story, the suffrage crusade began in Seneca Falls in 1848 and ended with the ratification of the Nineteenth Amendment in 1920. But this overwhelmingly white women's movement did not win the vote for most black women. Securing their rights required a movement of their own.

In Vanguard, acclaimed historian Martha S. Jones offers a new history of African American women's political lives in America. She recounts how they defied both racism and sexism to fight for the ballot, and how they wielded political power to secure the equality and dignity of all persons. From the earliest days of the republic to the passage of the 1965 Voting Rights Act and beyond, Jones excavates the lives and work of black women — Maria Stewart, Frances Ellen Watkins Harper, Fannie Lou Hamer, and more — who were the vanguard of women's rights, calling on America to realize its best ideals. 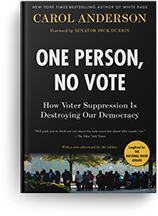 One Person, No Vote by Carol Anderson

In her New York Times bestseller White Rage, Carol Anderson laid bare an insidious history of policies that have systematically impeded black progress in America, from 1865 to our combustible present. With One Person, No Vote, she chronicles a related history: the rollbacks to African American participation in the vote since the 2013 Supreme Court decision that eviscerated the Voting Rights Act of 1965. Known as the Shelby ruling, this decision effectively allowed districts with a demonstrated history of racial discrimination to change voting requirements without approval from the Department of Justice.

Focusing on the aftermath of Shelby, Anderson follows the astonishing story of government-dictated racial discrimination unfolding before our very eyes as more and more states adopt voter suppression laws. In gripping, enlightening detail she explains how voter suppression works, from photo ID requirements to gerrymandering to poll closures. And with vivid characters, she explores the resistance: the organizing, activism, and court battles to restore the basic right to vote to all Americans.

Download the discussion guide for One Person, No Vote (PDF). 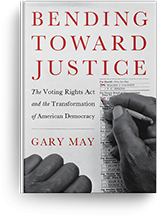 Bending Toward Justice by Gary May

When the Fifteenth Amendment of 1870 granted African Americans the right to vote, it seemed as if a new era of political equality was at hand. Before long, however, white segregationists across the South counterattacked, driving their black countrymen from the polls through a combination of sheer terror and insidious devices such as complex literacy tests and expensive poll taxes. Most African Americans would remain voiceless for nearly a century more, citizens in name only until the passage of the 1965 Voting Rights Act secured their access to the ballot.

In Bending Toward Justice, celebrated historian Gary May describes how black voters overcame centuries of bigotry to secure and preserve one of their most important rights as American citizens. The struggle that culminated in the passage of the Voting Rights Act was long and torturous and only succeeded because of the courageous work of local freedom fighters and national civil rights leaders — as well as, ironically, the opposition of Southern segregationists and law enforcement officials, who won public sympathy for the voting rights movement by brutally attacking peaceful demonstrators. But while the Voting Rights Act represented an unqualified victory over such forces of hate, May explains that its achievements remain in jeopardy. Many argue that the 2008 election of President Barack Obama rendered the act obsolete, yet recent years have seen renewed efforts to curb voting rights and deny minorities the act's hard-won protections. Legal challenges to key sections of the act may soon lead the Supreme Court to declare those protections unconstitutional.

A vivid, fast-paced history of this landmark piece of civil rights legislation, Bending Toward Justice offers a dramatic, timely account of the struggle that finally won African Americans the ballot—although, as May shows, the fight for voting rights is by no means over.

Download the discussion guide for Bending Toward Justice (PDF).

The LEH grant limits participation for each of the four discussions. Spots will be assigned on a first-come, first-served basis, though a waiting list will be available.

Participants can register online. They will receive a confirmation that includes instructions on how and where to receive a copy of the book. The LEH grant covers the books’ costs.

The Zoom link will be sent to participants one week before the discussion date.

For those who are unable to register but wish to participate, the University has increased access with a simulcast on Dupré Library’s YouTube channel. Acadiana Open Channel has agreed to televise the discussions and livestream them to its YouTube channel as well.

Supporters of the Series

A Who Gets to Vote? Conversations on Voting Rights in America Guide prepared by library staff members is also available.

Visit Louisiana Endowment for the Humanities for an overview of the grant.

A digital exhibit on the League of Women Voters has been created by Special Collections as a supplement to this series.